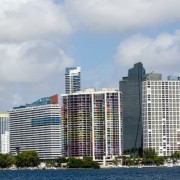 As skyrocketing prices soar above the condo high-rises that dominate the Miami skyline, investors money has receded to more oxygen-rich segments. Though condo sales are slacking, funds continue to pour into the Miami real estate market.

Commercial property seems to be the target rich area as 2016 came to a close and 2017 launches into view.

A recent interview with Alex Zylberglait, the senior vice president in charge of investments for Marcus & Milchap in Miami, exposed his experiences and opinions on this new trend.

Over the last two years, Miami has seen investor funds buying up commercial property grow from over $465 million to $1.75 billion. Although there was a bit of a drop off in 2016, those numbers are still impressive and still show substantial proof of a positive trend.

Luxury condos slowly started saturating the market in 2014 and investors were quick to pick up on this developing asset.

Although commercial sales were slightly lower in 2016 than in 2015, investors are still purchasing steadily. These investors are mainly from South America where they are looking to keep their funds clear from economic recessions and the turmoil in Venezuela.

Zylberglait sees a strong market in 2017 for commercial properties. He did temper his remarks by saying that by late in the year the market could see some slight price correction as economic and political conditions change in the United States.

Even if that is the case, Zylberglait went on with assurance, the equity and strength in the market are deeper than during the last correction. Adding in the maturity of the Miami marketplace, the city is poised to withstand a minor correction.