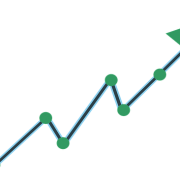 After the 2009 financial crisis in the US, interest rates plummeted, and they’ve only recently started to rise again. Starting in December 2015, the Federal Reserve began to raise the funds rate, and the Federal Open Market Committee has voted to raise rates three time since then.

For savers, these rates haven’t affected much – interest rates have only risen slightly for them in the past year, and the difference between one percent and 1.2 percent may not warrant shopping around for another bank. The banks are full of savers’ cash and therefore not pressured to compete for deposits. The biggest banks often offer the lowest rates, even for customers with millions in their accounts. Customers wanting to increase their yields should consider regional or lesser known banks that do need the cash and are willing to offer higher rates.

Interest rates have changed more significantly for borrowers, though some products have hardly seen any change at all. Auto loan rates are down due to the competitive market and the rise of auto defaults. Home mortgage rates dropped after the Fed’s first rate hike in 2015; however, they have bounced back since then, since those rates are less affected by the Fed funds rate.

Historically, credit card rates have closely mimicked Fed rates, and this time is no exception. However, consumers may still find opportunities to save – those with good credit scores may be able to find cards with limited time rates of zero percent. And the Navy Federal Credit Union, the largest credit union in the US, took the last Fed hike in June as an opportunity to stand out from the crowd, dropping their basic card’s rate by two percentage points.

Steverman, Ben. Why You Don’t Feel the Fed Rate Hike in Your Bank Account. (2017, July 18). Retrieved from https://www.bloomberg.com/news/articles/2017-07-18/why-you-don-t-feel-fed-rate-hikes-in-your-bank-account