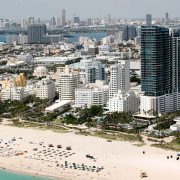 A tight housing market has pushed prices out of reach for a large chunk of would-be buyers across the U.S., forcing millions into an apartment market that digs deep into monthly paychecks for rent, especially in high-cost markets like Miami.

Nearly 39 million U.S. residents live in homes they can’t afford, according to a national housing report released Friday by Harvard University. The findings point to a growing concern over housing affordability and shines a glaring light on Miami-Dade County’s pricey market.

Miami was one of 11 large metropolitan areas where more than 40 percent of households were cost-burdened, meaning over 30 percent of their income was gobbled up by housing costs.

“While the recovery in home prices reflects a welcome pickup in demand, it is also being driven by very tight supply,” said Chris Herbert, managing director of Harvard’s Joint Center for Housing Studies. “Any excess housing that may have been built during the boom years has been absorbed, and a stronger supply response is going to be needed to keep pace with demand — particularly for moderately priced homes.”

Apartment dwellers have it worse. Among Miami renters alone, 62 percent were considered cost-burdened while 35 percent spent more than half their income on rent.

The report also highlighted Daytona Beach, where 57 percent of renters spent over a third of their income on rent in 2016. The least affordable cities were not ranked.

The affordability struggle is a function of rising demand for housing combined with limited — and costly — supply.

Fewer residential units were built in the U.S. over the past decade than in any 10-year period since the 1960s. A large portion of the new homes tend to cater to higher-end purchasers, not first-time homebuyers.

The for-sale inventory hit a record low at the end of 2016, further squeezing supply of homes on the market. The result? More and more people are renting rather than buying. The national rental vacancy rate dropped to its lowest level in three decades last year.

However, most apartment units built are considered luxury. Twelve of the 20 rental developments with 50 or more units built in Miami-Dade in 2015 were high-end with the average rent swaying near $2,100, according to a study by RentCafe.

The U.S. housing market hit a significant milestone last year when home prices reached their pre-recession peak. This helped reduce the number of homeowners underwater on their mortgages to 3.2 million from 12 million in 2011.

While Miami-Dade home prices have risen 74 percent since 2000, they’re still below their peak. About 16 percent of homeowners remained underwater on their mortgages in 2016, more than double the national rate.

This work has been released into the public domain by its author, Miamiboyz at English Wikipedia. This applies worldwide.
In some countries this may not be legally possible; if so:
Miamiboyz grants anyone the right to use this work for any purpose, without any conditions, unless such conditions are required by law.