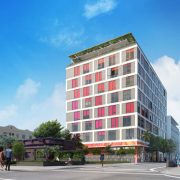 Millennials and empty-nesters are moving in droves to city centers nationwide, but there are few places where the urban renaissance is more obvious than Miami.

The push has transformed the city into a multi-dimensional metropolis: Neighborhoods that were once overlooked are getting newfound attention from tourists, residents and real estate developers alike.

“The Miami of 20 years ago versus today is night and day, and what it’s going to be in 20 years is night and day,” said Martin Pinilla, co-founder and managing partner of the Barlington Group, a Miami company actively investing in Little Havana, west of downtown Miami and the home of the Miami Marlins stadium.

Pinilla was one of five speakers on a panel focused on emerging Miami neighborhoods during a CREW-Miami luncheon Wednesday.

He was joined by other real estate leaders, including Shari Neissani, vice president of asset management for New York’s RedSky Capital, a major real estate owner involved in Wynwood’s striking transformation from an industrial base.

RedSky found in Wynwood what it initially saw in its Brooklyn home of Williamsburg years ago. The group began investing in the Miami enclave about four years ago with hopes to enhance and preserve its artsy, eclectic culture by revamping its dated real estate, Neissani said.

RedSky plans to soon break ground on its first local development, CUBE Wynwd, the first office building to rise in the community. It plans another office building at 2700 NW Second Ave., which was purchased for $31 million last year.

But it’s not easy to develop property in Miami, especially in up-and-coming neighborhoods like Wynwood, Little Havana and Allapattah, the panelists said.

The city sees the desire to build but sets high hurdles, Neissani said.

RedSky’s strategy has been to work with Wynwood property owners to design projects that fit with the neighborhood to improve their chances of city approval.

In Wynwood, stakeholders have successfully established the Neighborhood Revitalization District, or NRD, with a zoning code specific to the neighborhood that opened the door for development while keeping its arts orientation intact.

While plenty of high-end buildings have risen in Miami, few affordable options have been delivered. The historic Little Havana neighborhood has small parcels dominated by one- to four-unit homes for middle- to low-income residents. It’s walkable with mass transit access, and it remains affordable compared with the pricey Brickell district to the east and Coral Gables to the south.

Cho commends the effort: He supports less restrictive parking requirements as well as smaller and more affordable spaces across these neighborhoods.

Many homes in Little Havana date back to the 1930s and “require a lot of love” but hold a lot of promise, Pinilla said.

Cho sees Little Havana and Allapattah as home to Miami’s future creative workforce. It’ll be tough to attract companies to the area if their employees can’t afford a place to live.

Mass transit is also key, said Mitch Patel, CEO and senior managing principal of Platinum Cos. If the neighborhoods aren’t interconnected, residents and employees will have a hard time getting around.

Patel warned a lack of reliable transit options may deter people from moving to urban centers and reverse the trend responsible for the re-emergence of these neighborhoods.

Cho, a relative Wynwood pioneer who arrived in the neighborhood 17 years ago, said it’s important for each community to preserve its character.

“Wynwood was about street art,” he said. “Each neighborhood needs to have its own defining principle, its own characteristic.”

As land prices escalate in Wynwood, investors have started looking elsewhere. A number of high-profile deals has thrown Allapattah into the spotlight. The working-class neighborhood sits north of Little Havana and west of Wynwood.

It has a strong industrial core — “similar to what Wynwood looked like 10 to 15 years ago” — and a solid housing base.

When asked about Miami’s next frontier, Patel answered, “Every neighborhood is game.”

Above Image: Rendering of the office tower to be built in Miami’s Wynwood neighborhood. Credit: RedSky Capital

The battle continues: Las Vegas & Hawaii crack down on Airbnb